I shot this a few Easter mornings ago and, as I was cleaning out some of my files, this caught my eye.  I remember the morning so well–it was very cold, a holiday morning, and I wondered a lot about the man in the photo.  Was he enjoying some quiet time?  Doing something he really loved?  Or, perhaps, escaping from either the loneliness of an empty house on Easter morning or a spouse he would rather not awaken to.

No matter the reason.  There he was, hearing only the lap of the waves and, likely the chatter of his own teeth.  Then again, there I was–out in the cold, camera in hand, all by myself.  Not escaping from anyone–likely thinking I wished I’d stayed in my warm bed with my husband.  But that which I also loved–capturing a bit of solitude and creativity in a park I love like no other–took me out of my warm, comfortable home for a bit.

The season following the holidays brings with it such drastic weather, my natural inclinations kick in.  I want to hibernate.  Over the holiday week, my husband and I were both hit with a flu like no other.  Knocked us both flat on our backs.  It doesn’t take long for me to become complacent–I have not touched my running shoes for a few weeks, nor picked up my Canon to capture much of anything.  Rest is important, but if you sit for too long, it can become very difficult to get moving again.

Time to get moving into a brand new year.  Cheers to all!

May you always believe in magic.

Thinking about the mountains today.

Or maybe just thinking about vacation, and mountains are usually part of the schema.

No matter.  Have a great day 🙂 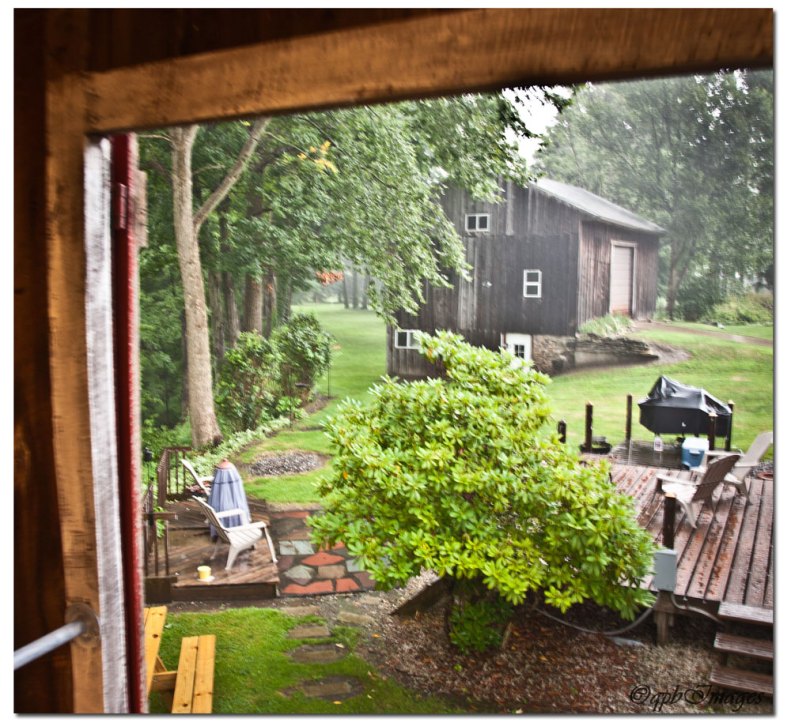 Rain outside my workshop

We’ll pretend the pictures is not sharp because of the rain.  In all actuality, its very likely one of the two resident cats was either pawing at me or jumping on to my lap.
That being said, this is the view looking out from the side of my studio, on to our property.  On this particular morning of just a few weeks ago, it was a gloriously rainy Sunday.  In my younger years, I loved the balmy hot days of summer.  I thrived in arriving at the beach in a swimsuit, ready to soak up those cancerous sunny rays of light while I sweat and napped the day away in the sun.  Those days are long gone for me.  Although I really do enjoy the warmth and mobility a summer day gives, I no longer wish for a grueling hot day of sunshine when temperatures peak in the upper 80s.
This may have something to do with my abhorrence at the thought of putting a swim suit on.
Moreover though, there are many chores a summer’s day requires in my adult life–chores I don’t mind doing–mowing the lawn, weeding a garden.  Those tasks are much more pleasant, though, when the temperatures hover in the 70’s and a nice breeze pushes the air around like a fan.  Even better–the respite of a warm, rainy day.  No chores to be had outside, one has no other choice but to sit back with an extra cup of coffee and a good book.
And, of course, a kitty cat to rest on your lap.
Happy day to all.

Here’s lookin’ at you.

Have a safe and wonderful holiday.

I can't get it in the barn!

Every once in awhile, I get the urge to play around a little bit with my Photoshop.  When I do process photos, most of them are done with LR2.  Its quick, easy, and intuitive.  Lately, though, I’ve been marveling at what folks can do with certain effects, especially paint effects.  They aren’t for everyone, but this photo seemed suited for it.  I love how the effect softens the grain of the barn’s wood.

There is a black walnut tree behind our barn.  This little fellow was intent on pulling thru the unhusked walnut (the large green object) through the small hole for winter’s storage.  We watched through our kitchen window as he’d run up the barn with the nut, attempt to pull it through and then drop it–only to start the process over again.  A lesson in perseverance (and survival):  an inspection of the barn’s loft reveals a hefty line up of walnuts for winter’s feasting.

Aw, if only he had a fireplace up there…

In memory of Cindy, who passed yesterday at the young age of 54.  I am not sure how peaceful her passing actually was, but her death occurred on the last day of Breast Cancer Awareness month.  Tragically fitting.  Rest in peace, Cindy. 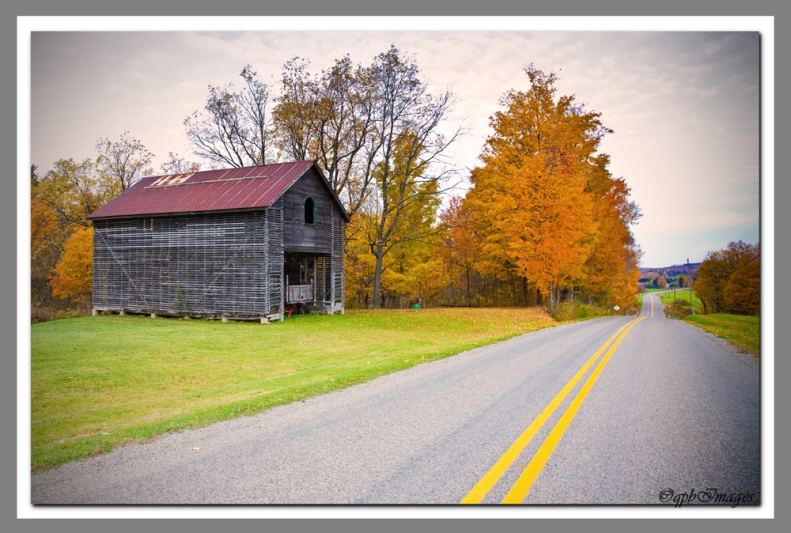 The color version of my black and white cornbin.  Leaves here in NW Pa are now far and few between.  It is amazing how quickly a season can visually pass with the aid of high winds and heavy showers.  Were it not for the help of our cameras, the seasons would but a flicker of memory.

As for now, it seems fitting to begin looking down the road to the next season, with its holiday cheer, fireplace evenings, and family gatherings.

We’ll see you all down the road apiece…and Happy Halloween!

Eeek. This is exactly what I appeared to have done. Some minor roadblocks have prevented me from blogging. I hope to be back soon to finish off the hike muses.

I was filled with good intentions to get out and see the sights.  When it came right down to it, I never got too far away from the hotel.  My sightseeing was limited to a perimeter of several walking blocks and to the sights I could see from either the taxis or buses as they shuttled us to and from our various sights of instruction.  This is a skyscraper (obviously…) which I shot in the first day or so I was here.  What can I say?  Our hosts kept us very busy.

Today’s session, our final session, ended around 11 am.  My choices were as follows:

1 ) go back to the hotel and, with some luggage stowed behind the desk and some (heavy) items in tow that the hotel would not stow for me (like my cameras and laptop), I could walk around the surrounding area OR…

I picked the airport.

Unfortunately, my flight does not leave until 11 pm.  I am not sure who made these arrangements for me.  Apparently, I angered someone at the travel agency (or my secretary did).  But here I sit.  I’ve wandered from terminal to terminal.  Spent more money here than I did when I was in the city (except for the rather lucrative killing the sushi bar made on me last night), and I believe–I fear–that since I’ve been like a nomad traipsing about the airport, security likely has their eye on me, ready to pounce at any moment.  Dare I say I look suspicious?  Yes, I dare, I dare!  I’ve gone about, from floor to floor, searching for little shops to look in, coffee to drink, and a place to plug in my laptop and blackberries so as not to drain the batteries down too much.  I’ve been doing this for almost eight hours.  I would arrest me, too.

Earlier this week as I flew from East to West, I peered out my window a good deal of the time, fascinated by the landscape below me.  Do you know how much of the USA appears to have almost no one living in it?  Surely, many areas are relatively uninhabitable.  I viewed desert and canyon areas for much of the last part of the trip.  But we also flew over quite a bit of territory where, other than some farms here and there, it appeared no one was occupying it.  I realize that this is our heartland, where the cattle roam and the potatoes grow.  But from an aerial view…it looks pretty darned empty.

When we flew over LA and subsequently arrived here, I realized why the middle of the country was so sparsely populated.  Everyone lives here.  In Los Angeles.  Its wall-to-wall people, wall-to-wall buildings and, gosh darn it–wall-to-wall vehicles.  There’s a very nice subway system (allegedly–I didn’t get on it)–but apparently it is not well used because everyone loves to drive their cars.

Driving is somewhat of a misnomer here–sitting in traffic is really what people here must like to do.  Perhaps there is some level of enjoyment or challenge to driving out into a swarm of stopped vehicles, just to see how far you can get each day before having to come to a complete stop.  I would imagine they take laptops and get a good deal of their work done while they wait for the traffic to move an inch or so.  Maybe they don’t even make it into an office.  They just drive out as far as they can get on the freeway, get out their mobile work stations, produce a lot of whatever, and then–when traffic thins–they hit the nearest exit and return home.  Sure would save on gas if they followed this method of commuting.  A new idea is born?  Perhaps I will win some Nobel prize for thinking green and solving (or at least putting a sizeable dent) into today’s energy crises.

But then I digress.  This was a learning mission, and learn we did.  Our training included an on-site visit to an agency office in one of the more difficult neighborhoods served by the county’s child welfare system.  I have to say, with complete respect, our hosts were extremely gracious and their presentations and practice models very, very impressive.  The child welfare system here has struggled over the last few decades.  And it continues to struggle.  New leadership is slowly but surely righting the ship.  An overwhelming and thankless task to which innumerable individuals are completely dedicated to and passionate about.  There is no mistaking the care and love these individuals are putting in to reshaping their system, and I take my hat off and bow in respect.

Thank you, to the angels serving the angels, in the City of Angels.

The very best to all this evening.